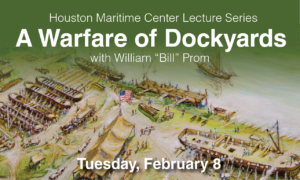 On Tuesday, February 8, Chapter-member Bill Prom ’09 will present “A Warfare of Dockyards: Expeditious Shipbuilding in the War of 1812” as part of the Houston Maritime Center‘s History Lecture Series.  It will be similar to the talk he gave at the Chapter’s June Luncheon, so if you missed it then, this is an excellent opportunity to catch it again.  Here are the details:

The lecture covers the exploits of the self-taught shipbuilders, Noah and Adam Brown, who over the course of the War of 1812 built everything from gunboats to ships of the line. Their work included some of the most successful privateers of the war; the sloop Peacock, which took more prizes than any other U.S. Navy ship; and Robert Fulton’s steamship Demologos. However, their most impressive work was on the lakes. They built Perry’s squadron at Lake Erie with nothing but hand-powered tools in the winter of 1813. And in 1814, they built Macdonough’s squadron on Lake Champlain, which included launching the brig Eagle in 19 days after laying the keel. In both cases, the brother’s ingenuity and resourcefulness contributed directly to American victories. As entertaining as the brothers’ exploits are, the lessons that their story provides for our modern Navy regarding the importance of a strong commercial maritime industry are even more impactful.

Read more about the Houston Maritime Center and register for the event here.